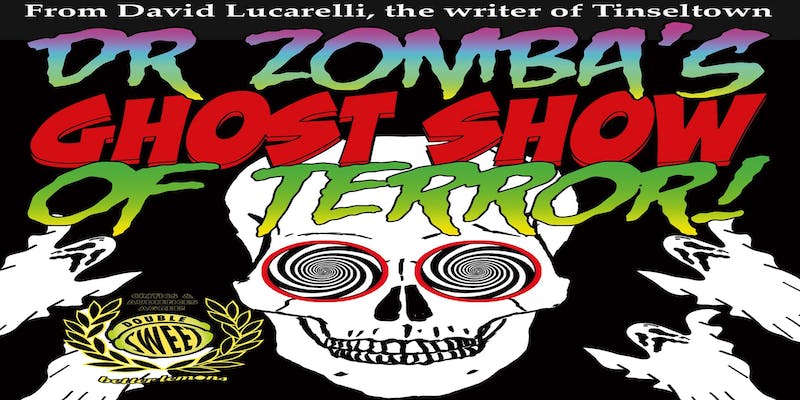 Los Angeles, CA, September 277, 2018. Doctor Zomba’s Ghost Show of Terror, the campy horror comedy that made its debut this summer as part of the Hollywood Fringe Fest is returning for the Halloween season. The sold out initial run won Midsummer Screams’s Screamiest Award, the Encore Producer’s Award, and earned a Double Sweet Award from audiences and critics alike from Better Lemons.

Doctor Zomba is a modern day revival of the “Ghost Show” popular in the 1950’s that features spooky magic, comedy, a séance, and an immersive blackout sequence at the climax where the audience is in total darkness and surrounded by supernatural phenomena they can see, hear & feel! Opens October 20th at The Complex, 6476 Santa Monica Blvd, Los Angeles, CA 90038.

Join Doctor Zomba, his lovely assistant Sirena, and the slightly less lovely Ear-Gore as they perform mesmerizing tricks, contact the dead, and unleash monsters from beyond the grave! First, sign your waiver! We are not responsible if this show literally scares you to death! One lucky audience member will win a real dead body! See Sirena’s Dance of the Damned, banned in 47 countries! See Professor Payne’s infamous Mutilator Machine. It thirsts for blood! Will it be yours?! Starring David M Beach as Doctor Zomba!

WHO IS THIS SHOW FOR? All the monster kids that grew up loving Halloween, haunted houses, Famous Monsters of Filmland, & TV Horror Hosts. While much of the supernatural phenomena in the Ghost Show is played for laughs, there is a two-minute blackout sequence at the climax in which the audience is in pitch darkness, and they will SEE, HEAR and FEEL the mysterious & unexplained. If your child is younger than 9, or afraid of the dark, this might not be the show for them.

WRITTEN/PRODUCED BY David Lucarelli (writer of Tinseltown from Alterna Comics & The Children’s Vampire Hunting Brigade graphic novels). “Before they put on haunted houses for Halloween, ghost shows were a spooky, scary, funny way to celebrate the things that go bump in the night. The climax of each show was the blackout sequence in which the audience was enveloped in supernatural phenomena. We went back and studied the actual ghost show manuals from the 1950’s, and then we came up with a few tricks of our own! For our Halloween run we consulted with a magician from the Magic Castle who gave us a great idea for a new effect we’ll be adding.”

“The casting of David M Beach as Doctor Zomba proved to be a real stroke of luck. One of the best ghost shows from the 50’s was Doctor Silkini’s. Years ago, the people that had the rights to the show hand picked comedian/actor/magician David Beach to be the new Doctor Silkini for a revival. It didn’t end up happening, but we’re extremely excited to we have the natural successor to one of the Ghost Show masters as our star!’