Queen Mary’s Dark Harbor opened this past weekend with a mix of fan favorites and a brand new maze. Now celebrating the 10th anniversary of the event, Dark Harbor has become a local favorite on the haunt scene, offering a very different vibe than the larger theme park entries competing for folks haunt dollar.

Dark Harbor is unique for its compact layout and emphasis on a fun social vibe that larger theme park attractions in the area lack. Feeling like a carnival midway on steroids, the evening fills with the smells of (admittedly a bit overpriced) tasty foods of every variety and the sight of numerous roaming characters who are always willing to jump into a photo and interact for a quick creepy conversation. Some of them may offer up tokens that gain you access to hidden bars throughout the event.

There are private cabanas available if you want a place for your party to be able to land, rest, and regroup between mazes. Multiple tiers of passes offering a variety of entrances to the mazes allow for a variety of budgets to get in on the fun. It all adds up to a fun festive atmosphere.

However, the main draw are the mazes.

Russell: This has definitely been my personal favorite maze in years past, emphasizing water imagery and the repeated encounters with Scary Mary, a young girl haunting the bowels of the ship. This year, the maze itself seems to be toned down and the actors hadn’t quite found their groove when we went through, numerous scares falling flat, and being slightly ill-timed. Some of the water imagery is gone this year, which is disappointing, all except for one clever visual near the end that was both enchanting and clever. Still fun, but not as strong as in recent years.

Mike: Lullaby has also been a favorite of mine. Since I’m into and participate in paranormal investigating, I love the thought of possibly going through the pool area (since it’s one of the most haunted places on the ship). This year though, we didn’t get to see the pool, which is a shame. This was the first maze we went through this year and it did not start the night off right. It seemed vacant through most of it. Scarce actors, effects, and props. It felt empty. We did go through again later in the night to see if it was just a case of “first group/first night” type of setting, but unfortunately, the scarceness was still there. We actually counted how long it took us to encounter an actor/scare in the maze and it was around 90 seconds. That may not seem like a long time, but when you’re traversing through dark emptiness on a maze that may last 5-6 minutes, that’s a lot of time.

Russell: A maze that has gone through several incarnations in the last few years, the draw this year is creepy set pieces of rundown rooms where scary characters lurk at the edges of darkness, reaching for you as you go by. They were not many jump scares in this maze for me, however the creepiness was certainly effective. Walking through the ships corridors, this maze has a definite tragic feel, as if you are witnessing crime scenes that have never been dealt with and then forgotten. However, in between those good sets with lots of atmosphere, there seemed to be little done to the ship area in general… I felt I was just walking through dark corridors rather than exploring the world we were supposedly visiting.

Mike: This was the second of three mazes on the ship. This maze also felt…unfinished. Things seemed spread out and lacked the visual eye candy effects that we’re so used to immersing ourselves in. There were more here than Lullaby and the sets were great to look at, but still not up to what Dark Harbor has previously offered. B340 is named after the infamous haunted room on the Queen Mary.

Russell: When you enter this maze, you are informed that you are late for your shift in the kitchen – and there will be repercussions. As you wander through gore-filled rooms you get the impression that whatever the maniacal chef is cooking up might include pieces of the staff. It seemed there was less gore than last year overall, but this is one of those mazes that gives you lots to look at as limbs and bodies pile up along your journey. For me, this had some of the best jump scares of the night. The cast was obviously having fun and enjoying the over the top visuals on display.

Mike: This is the third and final maze that is actually on the Queen Mary. Feast is one of the newer mazes (it opened over the last couple of years) and has great visuals and fun scares. If you’re a gorehound, then this is one you’ll enjoy. Who doesn’t like cannibal cooks and butchered up bodies stacked up to your eyes? This was the best of the ship mazes this year, but still had some issues. There is one scene where there is a meat grinder. In years past, you were given a choice to go through it or to go around it. This year, you had to know you could go through it as there was no choice given. Also, the end of it where there should be cushioning (since you’re crawling), it was all worn away and looks like it wasn’t updated for this year.

Russell: Home of, perhaps, the most cohesive feel of all the mazes is a Dark Harbor, Circus delivers on its title on every level. The theme comes through in every single room. Featuring circus characters that seem slightly sinister, wandering through this maze feels like you’re a glimpse behind the curtain of a show that is spiraling out of control. The signature mirror maze and ball pits give way too dark corners and hallways with scares that can happen all around you, sometimes even above you. More fun and bizarre than scary though, this one is about the sideshow atmosphere.

Mike: This is one of my favorite mazes at Dark Harbor. It’s just so fun! There are fun house vibes, side show performers, and even creepy animals. This maze is more about fun and silliness than scares. Don’t get me wrong, there are scares in here, but when you go through this and encounter evil circus performers leading you the wrong way in a hall of mirrors, or jumping into a ball pit, or the Bearded Lady complimenting you, it’s hard not to smile and get caught up in this one.

Russell: This is a beautiful maze where the production design manages to create several striking scenes of pure creepiness. A cemetery seems to hold mourners that will never leave, a chapel holds a congregation dressed in white that does not make you feel welcome. Some of the most interesting rooms of any Dark Harbor maze are here, almost feeling like a museum of the macabre… wander through the rooms slowly and appreciate the dark and claustrophobic atmosphere. Nice use of fog, darkness, striking visuals and ingenious props truly make this one of the more fun mazes Dark Harbor offers.

Mike: Like Russell said, this is a beautiful maze. For me, this is the most visually satisfying maze here. It goes from creepy, to eerie, to beautiful, to a place you do not want to be left alone in. The pacing was great and the use of actors in these places were spot on. This is a maze where all cylinders are firing. The actors, the effects (audio and visual), and the theme work so well together.

Russell: New for this year, Rogue is an absolutely welcome addition to Dark Harbor. Loosely telling the story of a ship in danger of capsizing, excellent use of uneven terrain, wide open spaces that contain water and a stunning sequence involving video projection, this maze is a highlight of the entire event. Rather than focusing on jump scares I found characters wandering toward me and whispering about their fears as they faced certain death. It certainly worked to create an ominous, yet somehow adventurous, vibe. Several areas actually manage to feel off-kilter and required me to steady myself as I moved forward. This maze is my personal favorite for this year.

Mike: This is the new maze this year! It replaced Deadrise. I could see traces of Deadrise within Rogue, but it is definitely not a carbon copy. One of my favorite things from this year happened in this maze. I won’t spoil it, but it involves the ship captain and seeing what’s ahead of you. It definitely made me have my “Whoa” face. I agree with Russell as there was less focus on scares and more focus about telling the story. It was a nice change and I just wish there could be even more interaction with the actors in a maze like this.

Russell: Overall, there were some missed opportunities in the mazes to maximize scares and atmosphere, but that sort of thing gets worked out as the actors find themselves as the season progresses. A compact layout of the event, tons of food to purchase, lots of fun opportunities to share the evening with friends and hang out between scares – Queen Mary’s Dark Harbor reaches the age of ten doing what it does best and maintaining their unique atmosphere that sets them apart from other haunt events in the area.

Mike: If I had to summarize this year’s Dark Harbor, it would be “sloppy”. I saw monsters inside the mazes on their phones, attendants not paying attention to customers because they were on their phones, empty mazes, updating that just didn’t happen, etc. Was it fun? Yes, of course! The mazes that weren’t on the ship this year were fun and the overall vibe of Dark Harbor’s carnival atmosphere definitely lends itself to a fun night out with friends during the haunt season.

Queen Mary’s Dark Harbor is open on selected nights throughout the haunt season. Check their website for price options and specific hours. 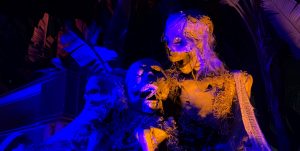