Intimacy is a risky thing. It makes us vulnerable.  It can blind our common sense and rational judgment.  Opening ourselves up emotionally or physically to another person is thrilling, but also dangerous.  It can also be the key that unlocks a treasure chest of glorious interactions and deeply fulfilling shared moments.  True love and true sorrow are born from intimacy.

“Stars in the Night,” the new show by Firelight Collective, is a descent into intimate moments.  Each scene takes you deeper and deeper into the hearts and minds of its characters – people wrestling with the fallout of being intimate with another. 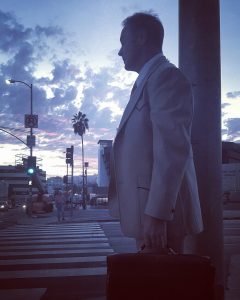 This show can be viewed as a tapestry. Each thread is a different color and a different texture but woven together, there is a cohesiveness – even if the pattern may seem jumbled and random. This new show relies on a fly-on-the-wall structure.  You follow a man (Matt Brown) as he wanders the streets of Hollywood, each doorway, cross street and passerby seems to pull him toward a memory of a woman he lost. It’s a rambling encounter that makes clear this evening is going to deal with things that may be elusive, things that may be slipping through people’s grasp.

Indeed, the next few characters we meet reinforce that.  A beach-friendly free-spirit (Will Nicol) who knows his friend, the ocean, can take as well as it can give. His sense of loss permeates the entire show and aspects of his life echo through the remaining scenes. A young woman (Jennifer Sacks) finds herself collapsing under the pressures of single life in a big city and wonders if she is indeed happy – a tough question to answer when others are so willing to tell you how you should be feeling. Each character carries a melancholy feel but the details of their lives they share with the tiny audience doesn’t add up to sadness… it all just feels so… restless.

The opening scenes remain fairly short and pave the thematic way to a final sequence that proves to be outright harrowing.  The fly-on-the-wall aspect I mentioned earlier comes into full play here. Standing on the edges of a small room as a couple prepares for an important evening, the level of intimacy reaches its most intense points of the show.  Rarely have I felt this uncomfortable during a piece of theater… it was thrilling while also being incredibly touching.

Different hearts ache and break in different ways, and this sequence is all about heartache, yearning and decisions that cause such emotion.

A playful woman of questionable motives (Deanna Noe) invites you to witness something important in her life.  That simple beginning of the final act seems innocent, but it leads to the type of scene rare in any form of theater – a scene of absolute realism and truth.

We, the audience, are observers.  However, the close physical proximity makes it feel as if we are witnessing and feeling what this couple (Allison Byrnes and David Haley) is going through as if we were participants.

Stakes are high, lives may or not be destroyed by the end of the evening by a simple phone call, an embrace at the wrong time, or a dessert gone wrong. This is treacherous territory and the cast plays each glance and gesture perfectly. It builds to a haunting ending that asks the audience to consider some intense personal territory.  Where are you risking in your life? Have you ever, truly revealed yourself to someone you care for deeply… are you brave enough to do so? When are you brave enough to be intimate?

This is deeply unsettling material because of the raw, brutal honesty on display by the cast.

There could be an argument made the piece would be stronger if connecting plot points between all of the scenes were more obvious.  Perhaps if the audience wasn’t moving through the scenes gathering what information they hear as characters move, lead and avoid the audience on its journey – would things land even harder than they do now?  A couple of the scenes feel very disconnected from the piece as a whole.   I can see how people could have this point of view as the show ends.  (Editor’s Note: We attended a preview performance and have been informed that additional information linking the scenes has been added to the show.)  For me, the overall thematic links are so strong that the rewards of this treasure hunt rest there… in brutal honest emotion. This is not simple, linear storytelling.  This is closer to a piece of music that hits its notes firmly in each movement but works because of an overall melody.  It was an honor to share such intimate spaces and moments with this powerful cast.

The current run is sold out, however, follow Firelight Collective on Instagram for updates on this and future shows. “Stars in the Night” has extended to a few additional dates and hopefully more will be added in the future.

Mike and I discuss our journey through this show on the My Haunt Life Podcast Episode 64.