The Speakeasy Society’s epic immersive journey called The Kansas Collection is coming to a close with Chapter Ten: The Portal, the Collection’s final chapter plays out this weekend in downtown Los Angeles. 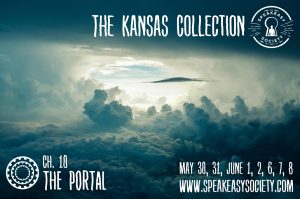 Over the course of three years, this incredibly talented group has been exploring the mythology of Oz after Dorothy leaves and the Scarecrow becomes King.  It has been a journey in tone and style, ranging from comedy to thriller to heavy drama to melodrama to touching sentimental schmaltz.  Part of the thrill of following this story as it unfolded was never knowing quite what to expect when you arrived at the location of any chapter.

The Portal has many familiar aspects that Speakeasy Society has proven masterful at handling.  A somewhat sprawling location becomes home to multiple storylines as the audience is splintered along various tracks, following characters that intersect in a variety of manners, each one affecting the story unfolding for whatever audience members are present to witness the encounters.  No other company in Los Angeles currently working in the immersive area handles this as well as Speakeasy does.

Any finale to an ongoing set of stories has to deliver on multiple levels to be a success.  Loose threads, major plotlines and character conflicts must all be addressed to some degree in service of the story.  The challenge is emotional impact.  Does The Portal deliver?  Overall… yes!  Warning:  Mild spoilers ahead…

For me, the evening felt as if I were attending two different shows.  A jovial and always welcome sight, Lyman (portrayed by John Henningsen) manages to awkwardly pull the audience into the show while showing his contagious enthusiasm.  Since the audience is split almost immediately in this chapter, I was happy to find myself with two characters I had barely encountered during any other chapter I have attended.  It didn’t feel like a finale, it felt like another entry of the series for me where I got to meet more residents of Oz.  Specifically, Lion (Jessica Rosilyn) and Lavender (Chynna Skye), a pair that provided some highly entertaining political one upmanship between each other until, finally, one character took a decisive step to proving who would come out on top in this game of power.  What followed was a chance to see the cowardly Lion wrestle with inner demons to see if courage was a thing she could call upon.

From there, Glinda (Natalie Fryman) and Ozma/Phobe Daring (Genevieve Gearhart) found themselves confronting each other in a show of power and knowledge… with audience members being used as bait or prizes depending on who was trying to prove herself superior in any moment.  The scene was thrilling to witness – two fascinating characters who need each other as much as they want to destroy each other going head to head.

Quickly following these developments, all tracks seemed to converge for the big finish.  As I mentioned, this felt like a two-part show for me and that second portion kicked into high gear fast!  Embracing all the set up we have witnessed in chapters leading up to this… the final scenes employed betrayal, magic, travel between multiple worlds, split personalities and… did I mention magic?  With most major characters coming back together for the final portion of the show, it was wonderful to see them, even if only briefly.  The final scenes of the night belonged to Phoebe Daring/Ozma as 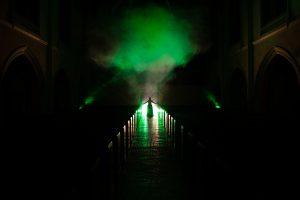 she ricocheted between negotiator, tormentor and potential conquerer of worlds as she did battle with Phil Daring (Matthew-Bamberg-Johnson), Glinda, Oscar Diggs (John McCormick).  This confrontation has been brewing for multiple chapters and it was exciting to finally see it play out amid shifting green light and billowing fog.  The very final moments proved extremely satisfying for those who have been following this journey for almost three years… The Lost Princess was found, although not how many thought she would be, I suspect.  (A nicely handled sequence featuring Deirdre Lyons.)

As I mentioned earlier, The Speakeasy Society is masterful at handling multiple tracks that complement and affect each other during the course of a show.  During the final act of The Portal, I learned key information about characters I had deeply connected to in previous chapters of this adventure.  (I cannot say much more than this to avoid big spoilers.)  It was a small letdown to know I had not witnessed certain things that happened earlier in the evening.  If I had been able to, I certainly would have attended the show a second time to witness some of those mentioned things unfold in person.

It felt odd on some level for the finale of the entire Kansas Collection to not make some of those major moments available during the big ending.  However, I DO realize I am mildly complaining about an aspect of Speakeasy shows I normally find quite satisfying – multiple tracks unfolding and influencing each other.  Simply put, my mild disappointment in not witnessing certain scenes on opening night of The Portal is that I had been so successfully moved by those characters in previous chapters.  All of this points to how much I have enjoyed this series of shows.

The Speakeasy Society has proven with The Kansas Collection (and their previous work known as The Johnny Cycle) that they are the most innovative immersive company working in our area and we are damn lucky to have them.