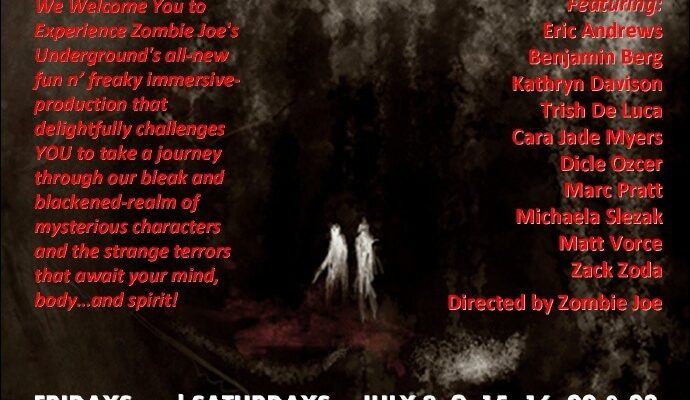 Brave the Dark at Zombie Joes – Haunted In July

Every once in a while, you come across something that you know nothing about. You’re the test pilot. You have no reviews to read and no word of mouth to listen to. Also, every so often, you come across something so special that it just hits you and you just know that this is going to be something people will want more of and will be talking about a lot. More often than not, these “somethings” are not one in the same, but then, sometimes, they are. Last night I attended something that was brand new, that I had no idea about AND something that was so incredible to me that I immediately started texting people and telling them to get a ticket.

Brave the Dark, the newest creation from Zombie Joe’s Underground Theatre, is described as “all-new fun n’ freaky immersive-production that delightfully challenges the thrill-seeker to take a journey through a bleak and blackened-realm of mysterious characters and the strange terrors that await the mind, body and spirit!” This is Zombie Joe’s first venture into immersive theatre…and it works….SO well….on so many different levels.

If you’ve been to things like Urban Death or Blood Alley at Zombie Joes, and enjoy them, you DEFINITELY need to see this. Imagine seeing Urban Death, but walking through the scenes. That’s what Brave the Dark felt like. My initial impression of Brave the Dark after it ended was that this was an unintended haunted house in July. I say “unintended” because they put this on as creepy immersive theatre and I don’t think they realize how special this is and that they’re onto something here. My first comment about what I had just experience was: “This was like a haunted house on crack that was created by David Lynch”. I was creeped out, I was smiling, I was nervous, I had my emotions toyed with, but most importantly, I had an amazingly fun time. This is a game changer for the Zombie Joe crew.

Please know, this is not a typical production. You will be walking around and not just sitting in a crowd and watching. You are experiencing this.

Since this is their first immersive experiment, the run of the show is only 3 weeks, starting tonight. There is so much potential here and I think the regular Zombie Joe fans will love this and the casual Zombie Joe fan will love it as well, but only after they’ve stopped screaming.