“They say that the second before our death, each of us understands the real reason for our existence…”

Russell: Love, at times, is magical. Moments of passion, doubt, bravado, lust, and joy can combine into a giddy stew of emotion. Firelight is a show that captures all those levels of intensity, creating wondrously intense scenes and deeply touching moments.

Mike: On the flip side of that, love can also be devastating for all of the same reasons in addition to loss. Not only does Firelight capture the magic of love, it also captures the devastation you can feel within loving and being in love. It combines both of these things into a perfect blend of emotions. 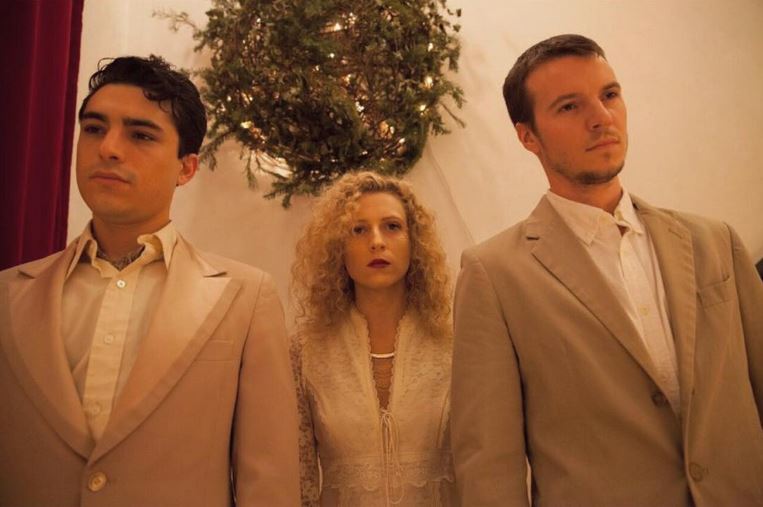 Russell: If you want to get all flowery, I guess you could say that Firelight transports you to another world. To be honest, that sounds too simple. Early in the show, a reference is made to the amount of time we have for love… to love. That moment echoes throughout the entire evening.

Skipping through time and relationships, you catch glimpses of intimacy… private moments that are normally shared in quiet whispers between lovers or potential lovers. Those moments within Firelight, as in life, can sometimes be deceptive in their appearance. When you enter a party to greetings of “Glad you are here!” you have no clue of the hidden secrets that exist in that room. There are secrets aplenty, there are intimacies that have happened, will happen, and may only be revealed through a glance or a simple comment. A simple, deceptive comment. Perhaps, even, a lie. I hope that does not sound cynical of me, the observer. For there is one thing that is absolutely clear about Firelight, this is not show that dwells in cynicism.

Mike: You are taken to and through another world. The sets in this piece are just incredible and left me in awe! I was not at a theatre space on Melrose in Hollywood anymore. The set design and the audio design in each room made every conversation and every space their own world with their own characters in their own story. Each story was different, but the base of it was the same. Love and what a precious thing it is. We were able to see love personified with some exchanges and we were able to see what love can and does cause people to do and say.

Russell: A confession from me is perhaps necessary. At one point, I thought that the show was insisting that all love has an expiration date stamped on it somewhere. In the end, I realize that was a misinterpretation on my part. Instead, I choose to walk away from Firelight believing that the statements of hope I overheard, whispers that even though love may grow stale, even go horribly wrong, it will survive. The heart of this show beats with optimism. Perhaps the love you have now will not survive, but it does not mean there’s not more for you somewhere.

Mike: I feel a similar way about this, but what I took from it was to cherish who you love in your life because you never know when they won’t be there anymore. This show made me take a step back in my life and reflect on those around me. Family members, friends, lovers, etc…I couldn’t help but to think about all of these people and how I treat them and if they were gone tomorrow, would I be able to live with myself based on our last interaction. This show made me want to call my parents afterwards and tell them I love them. It made me want to let all my friends know just how much I do care about them even though I always play my feelings off as a joke.

Russell: It seems, Mike, we were both heavily affected by this one, for sure. It is interesting that I felt more introspective, while it sounds like you were encouraged to reach out. Is this a result of how love has treated each of us in the past? (No, I don’t expect you to answer that… and I won’t, either.)

Firelight seduces you as it shows you seduction. But, where does seduction lead? Does it lead to game playing? Violence? Betrayal? Perhaps, sometimes, true love? This show features all of that to some degree.

Particularly fascinating is a sequence where the development of sexual trysts is revealed in half sentences and glances – sometimes not spoken by the person responsible for the thought but voiced by someone adjacent to the relationship. It’s a clever play on the game of seduction and its emotional aftermath.

In the end, the one moment that resonates most deeply for me is a simple gesture of two hands gracefully coming together as a couple serves guests, welcoming them into their home. All relationships are negotiated, they have ups and they have downs. Some forms of love can outlast any trial encountered. Does survival lead to genuine happiness? That’s arguable. What is not up for debate is the fact that somehow the connection I witnessed between that man and woman is real and very deep Is it a compromise, though? Does an apparent lack of passion diminish the value of a man and a woman committing to each other for better or worse? The simple gesture of two hands meeting reveals years of intimate history that has resulted in this moment… this agreement to remain… here. It is breathtaking to behold.

Mike: I also think that this show has you look at yourself and your life. I’ve been in situations like we encountered within Firelight, as I think many other people have been. Love is not always pleasant. It can hurt, but it can also be one of the greatest things you ever experience in your life. It can give you the strength to go on, even more so than hope. It will make you think and ponder many things and their importance to you.

Russell: In the end, perhaps Firelight’s greatest strength is not highlighting love or highlighting the discovery or loss of such a fleeting thing. Perhaps it is acknowledging that love is possible, but to win this game of love you absolutely must play. In the closing words of the show, those who have come are simply reminded it’s not about winning or losing – it’s about risking a bit of your heart and the rewards that may result.