The Speakeasy Society returns with an ambitious chapter in their ongoing Kansas Collection series of shows. Exploring the Oz mythology in a cleverly twisted manner, this series has focused on political intrigue and social movements of protest and rebellion. The Kansas Collection Chapter 5: The Vow rewards patrons of the previous chapters with shocking revelations and dramatic set ups for the futures of the characters. Additionally, The Speakeasy Society has smartly woven in a track for new audience members who need to be caught up on events so far.

Russell: The Kansas Collection has been telling the story of the Scarecrow King’s rise to power after Dorothy Gail left Oz. His reign has been controversial and given birth to several politically motivated and rebellious social factions.

Mike: Russell, stop right there. The Kansas Collection has really been telling the story of Ozma, the true ruler of the throne of Oz. Sure, the Scarecrow King and Dorothy are part of this story, but obviously the main focus is on Ozma and how she will come into power.

I think that is what is so great about what the Speakeasy Society is doing with the Kansas Collection. Depending on your track and who you come to meet, the story and your outlook can change. There are many wonderful people to meet in this story and each one of them can be a focus. 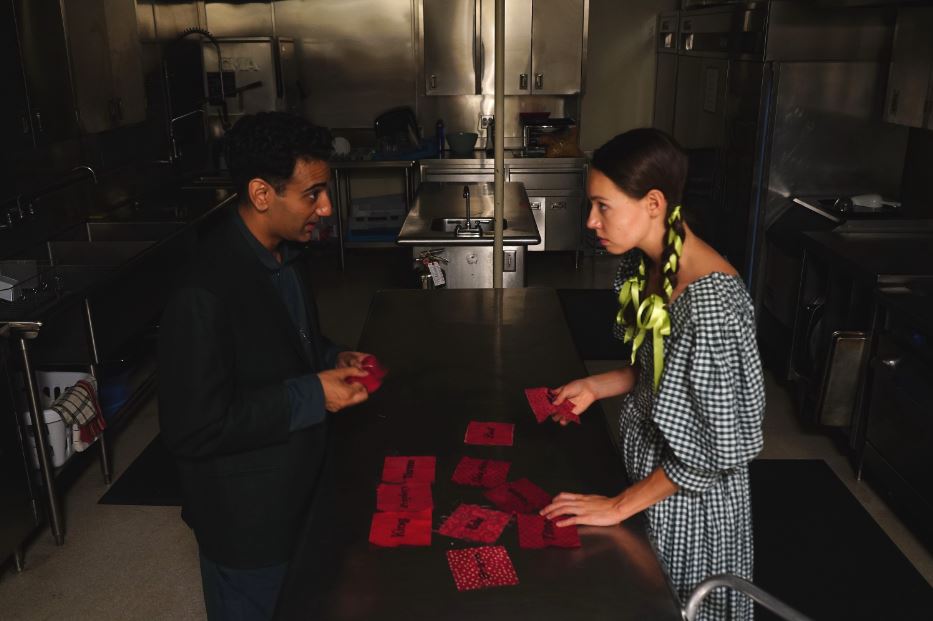 Russell: At “The Vow”, which is Chapter 5 of the Kansas Collection, the evening begins with an actual reception. Guests can get re-united with characters they have met in the past and introduce themselves to new ones they have not had the chance to interact with yet. I immediately reconnected with Tick and Jack, two characters who made sure we got invitations to this wedding in the first place. I certainly sense they are nervous, but I am not sure how much they know but are are not telling me. Last time I encountered Tick, I found our conversation to be comforting, even a bit inspirational. It was disturbing to see how nervous he seemed before the wedding. Phil Daring, brother of the bride Special Agent Phoebe Daring, pulls me aside to update me on activities he’s been involved in. Personally, I have a lot of sympathy for Phil… I know he’s under a lot of stress and been dealing with some health issues. I appreciate him setting me straight on certain things going on behind the scenes at the wedding… some, at least from his perspective, are underhanded and devious.

Mike: I need to emphasize something you just said “guests can get re-united with characters they have met in the past and introduce themselves to new ones they have not had the chance to interact with yet”. During the reception, this is what you should be doing! Despite what you’re wearing or who you align with, you can talk to every character. I believe there were about 9 different characters to speak to and to learn from. You may even get pulled aside by one and learn even more than you bargained for. This is where this show, and Speakeasy in general, really shines. This is immersive theatre at it’s best. This becomes real. No reading from a script. No pre-planned answers. Just real conversations with people that live in Oz.

Unfortunately, I didn’t get to speak to Tick this time around, but I did speak to Jack and he left me questioning what was really going on. I was able to play a game with him, but instead of the game I thought I was going to play, and a game I knew the rules to already, I was told by Jack that we would be playing the game under “Scarecrow Rules”. These rules were not very fun and I did not play that way. This is one of the subtleties that the Speakeasy Society excels at. While you may think this is just a random thing to do or say, if you look deeper, a whole new backstory/plot line develops. What is really going on in Oz?

Russell: Agreed. Interestingly, my game with Jack sounds different than yours. As we played, Jack took the opportunity to let me know that there were certain things he did not agree with under the Scarecrow’s rule… but he chose to obey them. Also, he complimented me on the bold color of my red shirt, it seems he had been strongly dissuaded from wearing anything than the traditional Oz green. 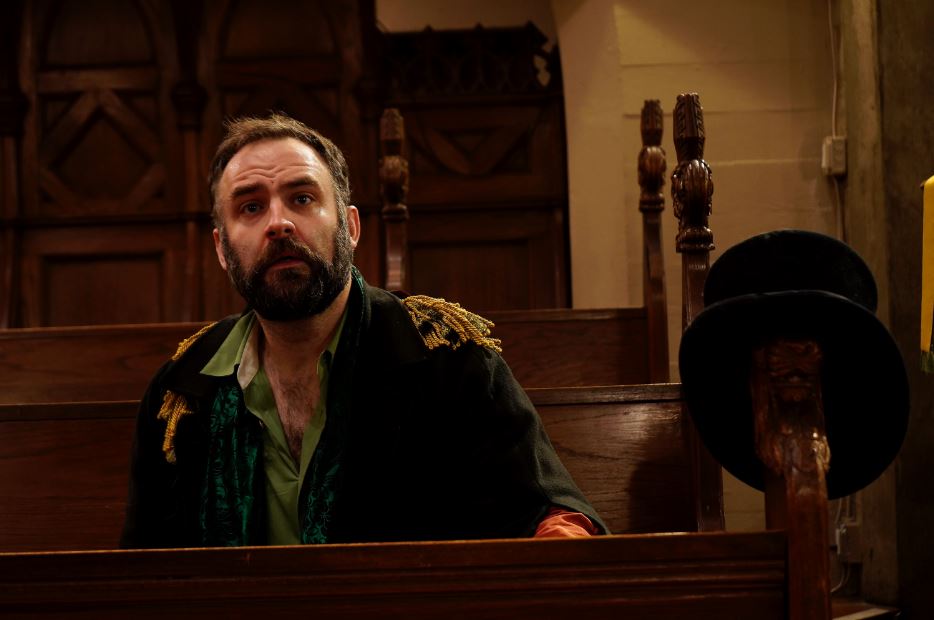 Not long after that game of lawn toss with Jack, a slightly inebriated Mr. Diggs recognizes me and calls me over to him. He immediately lets me know that he thinks I’m a fool. Apparently, my behavior does not fall in line with the way he thinks people should express discontent with political figures. I do my best to explain my position, but it’s clear he thinks I’m naïve and I’m actually hurting the chances of justice being found for those wronged under the Scarecrow King’s rule. Once a great and powerful wizard, I sympathize that he may feel unheard these days… but we seem to disagree with how best to express discontent in a public forum.

Mike: Mr. Diggs didn’t care much for me either. First, he called me out for wearing black to a wedding. I assured him that it was laundry day and it was the only thing I had that was clean. It was either wear black or not show up at all. The discontent really started when I showed him something he gave me nearly two years ago. When he saw that, he told me he should had never given it to me. My night was off to a great start.

Russell: The reception introduction gives the chance for multiple factions, each wearing colors that represent the side they stand by, to refresh themselves on story developments.However, the heart of the show was just about to begin!

We are ushered into a church with questionable acoustics and the wedding commences. Almost immediately, the simmering tension boils over. Uninvited guests appear, servants of the Special Agent Phoebe Daring slip up and reveal alliances that may expose them to retribution, and some, of course, do their best to rush the marital vows to a quick conclusion.

Let’s just say, things don’t go as planned. All guests are suddenly thrust into multiple tracks that isolate some groups and have others overlapping and interacting.

Mike: That’s the understatement of the year. Before this though, we get to see a beautiful ceremony. You get to watch the people you know and love each walk down the aisle. You get to see Phoebe Daring and the Scarecrow King look into each others eyes and recite “The(ir) Vow”(s). It’s beautiful to watch.

Russell: I understand what you are saying. By the time we reach the ceremony, we do care about the welfare of these people. Here is where the idea you spoke to earlier of investing in different characters, Mike, pays off… my interpretation of the ceremony is that I witnessed a beautiful wedding with underlying tension that does not bode well for all those involved. What follows the exchange at the alter are multiple tracks of secrets revealed, chaos, confusion and shifting perspectives. Where you stand is a result of who you have empathized with and choose to believe.

Mike: There are so many loose ends here and it makes me so excited for what’s to come. There are many more chapters of the Kansas Collection ahead of us and we all get to follow along and share in the love, chaos, and emotions of each person in this story.

Russell: This could be considered a mid-season finale of sorts, and indeed, there are cliffhanger elements to several of the story lines of this unfolding adventure. Like the best serials, the final moments leave the audience with a sense of impending doom. However, among us attending this ceremony, some have been given information that inspires hope that the future may be bright. But, you know what they say about the dawn of a new day… there are hours of darkness before the light arrives. The final words of the night indicate darkness may be dangerous for us all.

It should be noted that this production features qualities of The Speakeasy Society‘s past work which has many patrons coming back repeatedly. Fascinating multiple story lines, balanced with exceptional performances by the entire cast create a world that you want to be part of and want to return to in the future. The level of ambition repeatedly shown by this company is inspiring.

Mike: This is what made me fall in love with Speakeasy in the first place. Their ability to put on a show in this scale, with so many moving parts, with so much dialog, with so much choreography just blows me away. They’re a master of their craft. Like Russell said, you can come back multiple times and still see different things. There are certain parts that will stay the same, but you will definitely have a different overall experience each and every time you go.

“The Vow” runs Thursdays, Fridays, and Saturdays through August 25th. Tickets can be purchased here.