The always innovative and experimental Zombie Joe’s Underground Theatre has opened a third installment of their dark-toned vignette-style series of shows titled “Blood Alley 3.” Like never before, the troupe has reached a bleak, heavy emotional tone that almost never allows for any ray of hope or optimism to enter the audiences interpretation of the scenes.

Russell: Before the show began, I spoke with director Zombie Joe about the mythology behind this specific series of shows. “Blood Alley is an ancient alley haunted by spirits born of trauma, longing and sadness,” he states. “Bad things have happened here.”

Mike: I feel like that quote works for Zombie Joe’s Underground Theatre as a whole. We’ve seen many bad things within it’s walls…and even outside their walls! When you think of this “universe” when watching Blood Alley, it makes the show that much more great. Not only are you seeing things that are odd, horrific, non-politically correct, and at times, even beautiful, but you’re seeing these vignettes as spirits from throughout the years. These “spirits” are non stop for about an hour, which is a bit longer than previous Blood Alley productions. As soon as you see one scene end, another begins with a few seconds of blackout in between. First, your eyes adjust to the darkness going into the light and then your eyes have to adjust once you realize what you’re seeing.

Russell: Impressively rapid fire in delivery, the cast manages to invoke a multitude of time settings and social class levels with simple gestures or the change of simple costume. Indeed, the cast’s commitment to the material is one of the main strengths of the show. There are wonderfully subtle moments by many of the performers that, in lesser hands, could derail into camp or parody. Not here. This is a deadly serious affair.

One thing about this entry that separates it from the previous two versions of Blood Alley is the rare use of humor. There is humor present, but it does not feel like relief when it occurs. The show offers glimpses into moments of the past that have somehow left a mark on the alley… or maybe it is better to say resonates through the alley. This time around ZJU isn’t interested in lightening the mood and making the audience feel safe by giving it a moment of shocking humor. Past installments have brought howls of laughter at often cringe-worthy “did I just see that?” reveals. Not this time. 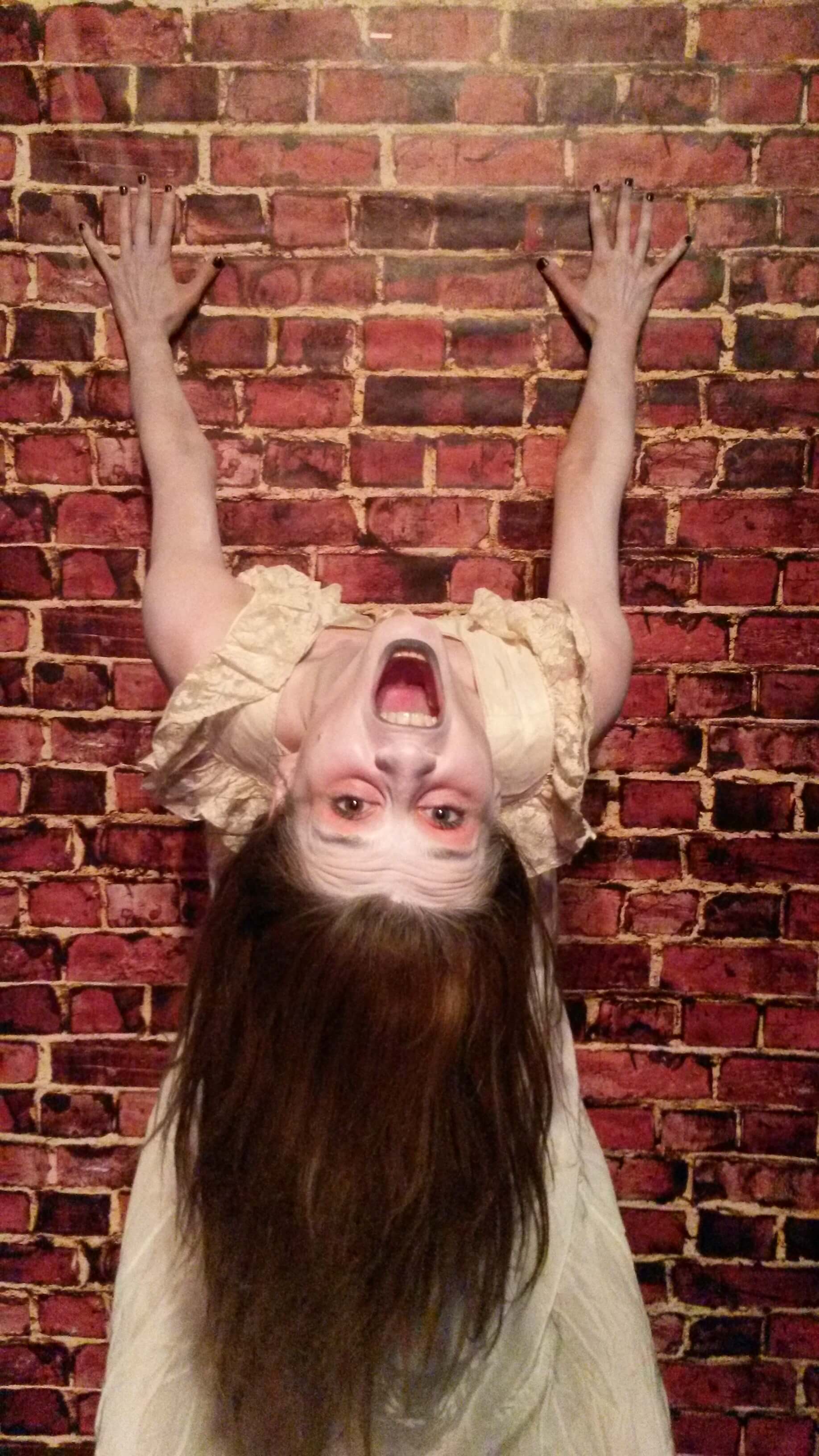 Mike: That’s one thing that caught me off guard, the humor. I wasn’t expecting it. There was dark humor and things that were funny. The dark humor worked for me and was a welcomed break from the tension that was being created. The “funny” things, to me, seemed out of place. If we go back to the mythology, I didn’t understand how certain scenes fit into this world. This time around, there were more scenes that I didn’t “get”. That’s not saying this was a bad show, it’s not, it’s fantastic, but for me, there were definitely some head scratching moments in the “I don’t get it” type of way.

Now while this show had scenes I didn’t get, this show also gave me some of my favorite scenes I’ve ever seen at Zombie Joe’s (across all shows!). I think my new favorite scene, which I’ll call “Rose” due to spoilers, is so incredibly horridly beautiful. The scene is so simple, but represents such meaning and emotion. I instantly started creating a backstory for this scene and how it came to be. I’ve been thinking non-stop about this since I’ve seen it. There’s a few other scenes that happened in this incarnation of Blood Alley that are among my favorites as well. “Umbrella” and also a 2-part scene that starts with one of those head scratching “How does this fit in?” and ends with a “Oh…wow. THAT’S how it fits.”

Russell: I do agree there are memorable moments, but for me the tone was so dark it almost became unenjoyable. “Blood Alley 3” is almost unrelenting in its dark tone. Abundant nudity and sexual scenarios unfold with an almost cynical glee, each one seeming to increase the feeling of desperate, unsavory voyeurism. We are here to witness. Darkness is presented.

For me, the strength’s Mike and I agree on are also the show’s greatest weakness. With such a talented cast working so hard to plumb the depths of sordid, violent moments in time… the whole feels a bit overwhelming. What little humor is present takes the form of deviance being fumbled or violence being inflicted upon a character for simply being who they are. By the end, I was wondering if I was supposed to be struck with some bold political statement about our society as a whole and current social media trends that highlight everything from bullying to humiliation to lies. But, if such a message was intended it is buried under the weight of despair. Themes of grief, domination and submission, abandonment, loss, desire, lust and self preservation are all boldly explored. However, hope is not a main course. Several times I found myself with the internal question of, “what am I supposed to feel from witnessing all of this?” I do not feel that this is a severe criticism… it just seems to have left me numbed rather than excited by what I saw.

Mike: This is interesting to me, Russell. It’s definitely dark, but to me, not as dark as you are taking it. I thought “Blood Alley Christmas” was darker in tone. To me, Blood Alley represents things so horrific and so messed up, that they can only be shown in this alley. I think because the humor aspect was added in at places, it took away from the constant pulverizing of my senses that I’ve felt in the past ones. I left this show enjoying it, but I didn’t have that “I feel like I got punched in the face and my day was ruined” type of feeling, even though there were scenes that left me feeling that way. Even though I didn’t leave with that horrible (aka good) feeling, I would still go see this specific incarnation again in a heartbeat.

The show is excellent. The cast is strong. The musical accompaniment is spot on, actually contributing heavily to the impressively consistent tone of the show. But, it is a heavy, heavy evening. Too heavy? Well, you will have to go and make up your own mind on that one. For me, there are definite rewards to visiting this stretch of the city – but this is an alley so dark I feel little desire to return to this particular path the way Mike does.

Mike: One thing I love about Blood Alley is the live score. You have one person, Kevin Van Cott, playing guitar and drums AND perhaps jumping in to “help” at points. I want to give this show credit for letting the music become a character and giving it its own scene. Cott’s talent is definitely highlighted more than ever and it’s welcomed and deserved. Another thing I’d like to point out is that there were some newbies in this cast. Kudos to you for sticking in there and showing us your strength and bravery. I hope to see all of you in future shows!

Russell: The fact that we had very different reactions is intriguing, Mike, and I think it points to something very important – this show packs quite an emotional punch. You and I may have been hit differently, but I think it is safe to say we were both hit – hard!

Mike: Blood Alley 3 is everything you’d expect from a Zombie Joe show and SO much more. Definitely check this out if you’re a fan of the macabre, horror, and feeling uneasy with a bunch of strangers.