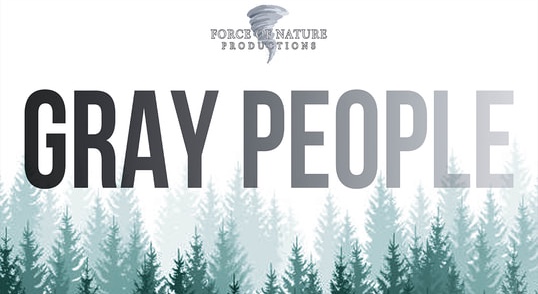 Three people wait in the middle of a forest for… a delivery. Even though the premise of “Gray People,” a new play by Kerry Kazmierowicztrimm, seems simplistic, there is a mystery to be explored here. Conversation crackles like a thriller, but at the heart of this night rests the discovery that every person we meet reveals only a part of themselves to us. It’s emotional territory viewed through a slightly grim, dramatic filter. 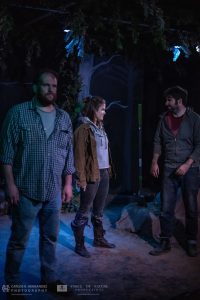 The night begins with a hole in the ground. Adam and James have been digging holes together for years. It’s what they do for a rather mysterious boss who calls when he needs items disposed of discreetly. Adam is in charge, obviously, and he’s on edge because this job has a new element in the mix. Their boss has insisted a young woman named Jenny join the two men for this latest assignment.

Since the hole has been dug, all that’s left to do is wait. Adam (Kyle Felts), thrives on the silence and remains guarded about anything he reveals about himself. He nervously checks his cell phone, waiting for word as to when their “package” will arrive. James (Walter Kartman), on the other hand, is open and wants to engage. Indeed, it’s as if he desperately needs to engage. He clearly cannot contain his excitement or curiosity or attraction to their new partner. Jenny (Olivia Lemmon) senses that her presence on this job is changing the rules and that may give her a surprising amount of power.

Watching these three performers craft each character is theatrical candy. The treat comes from realizing what may feel like an awkward moment is actually a deliberate choice. A pause that lingers oddly, a glance that seems too deliberate or a touch that may be affectionate or threatening all has purpose in the end. The words they speak hide agendas and dark histories. Every move they make reveals a small piece of information to each other. The cast is so strong, you may want to return a second time to see how many subtle performance moments you may have missed as the story unfolds. 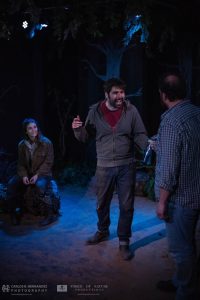 If there is an emotional engine driving this scenario forward, it is clearly James. Played with warmth and awkward charm, his enthusiasm and need to connect with his co-workers leads, unintentionally, to mounting tension among the three. Physically, he seems like a child in a man’s body. Clumsy and fumbling, his social awkwardness is at times tolerated by Adam, but it also sparks cruel moments of honesty that hurt and confuse James. Sharply observing this dynamic, Jenny quickly manages to place herself in between the men to manipulate and scheme for her own purposes. However, one of the play’s pleasant surprises is the tone of Jenny’s shenanigans. It would have been an easy writing or acting choice to play Jenny as a seductress. Instead, this young woman comes off more as a young girl when necessary and trustworthy friend when that is more beneficial. Innocence and sincerity actually prove far more useful to her than sexuality. As it is revealed as to why she has joined this digging crew on this specific night, the level of manipulation she is resorting to becomes clearer.

As these three people poke and pry at backstories and secrets, “Gray People” manages to become an exploration of truth. Not truth as in reality but truth as in what we convince ourselves is real in our daily lives. James is an open book, a young man who trusts in what he sees and hears. It makes him the most honest of the three, but it also makes him the most vulnerable and, perhaps, the most dangerous. (If everyone is playing some sort of game, what happens when you encounter someone who doesn’t read the clues well enough to understand the game?) 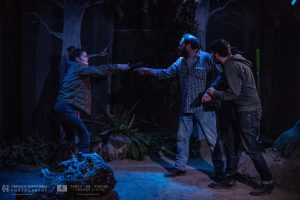 Adam wishes to adhere to a basic set of rules, a dependable structure to keep secrets hidden. Jenny manages to destroy that stability simply by entering the scene. Something about her rubs Adam the wrong way, and it should. Every conversation pushes a button or chips away at the relationship of Adam and James. All three of them begin to emotionally unravel on some level, ratcheting up the tension between them and forcing things closer and closer to violence. As that happens, each person may feel justified in the actions they take… but not necessarily satisfied. As the night progresses, the feeling increases that no one is going to leave this forest unscathed.

When things wrap up and the job is coming to an end, that is when all emotional cards are placed on the table. The true nature of the task at hand provides surprising twists as Jenny finds out she cannot read people as well as she thinks and James discovers how far he might go to protect what is dear to him. Adam ends the night by facing several personal ghosts (or demons?) but he also finds that he may care about those around him more than he ever wants to admit. After all, didn’t I say this play was about the “truths” we convince ourselves are real? 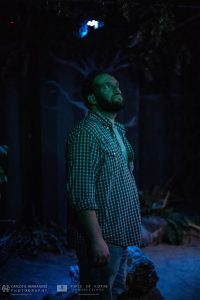 Playwright Kerry Kazmierowicztrimm wrote the award winning play, “Wounded,” that appeared in this year’s Hollywood Fringe Festival. This piece takes a step closer to thriller territory but manages to maintain the same level of sincerity in brutal, honest conversations that ground the piece in believable interactions. Directed by Sebastian Munoz, this production finds the perfect tone for the rather odd scenario to play out.

This production is a leap forward for Force of Nature Productions. They have been offering up work in a variety of genres for a few years. This show is like watching them take flight. The set, the performances, the direction, the script… this is solid on every front. A drama that plays like a thriller, the emotional twists of this piece may trick you into pondering your own loyalties and beliefs in your day-to-day existence.

Seriously, what are you hiding?

2 thoughts on “Gray People – Some Secrets are Darker than Others”