‘Tis the season for spooky stories.  Ghost stories told around a fire – it’s a tradition acknowledged within the opening minutes of “The Woman in Black,” currently being revived by Theatre Unleashed in North Hollywood.  It is an appropriate reference for the evening to come.   There are stories to be told…

If you are in the mood for tales of creepy cemeteries, isolated houses prone to chilling breezes, suspicious communities that dare not speak of evils that everyone knows are all too real, doors opening and closing by themselves, furniture moving on its own… Theatre Unleashed has a treat for you.  They have seized the moment to present this classic ghost story based on Susan Hill’s popular 1983 novella, adapted for the stage by Stephen Mallatratt 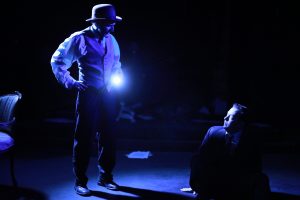 The set up is deceptively simple – Arthur Kipps (portrayed by Adam Meredith) is a lawyer haunted by a tragic event in his past. Wanting to warn his family of what he has faced in his life, he is unsure how to best communicate the story.  By enlisting the services of an Actor (Spencer Cantrell), the premise moves quickly into creepy territory as Arthur reveals details of frightening encounters that may hint at a deadly curse.

This piece relies heavily on the earnestness of the cast.  As Arthur, Adam Meredith, easily slips from dialect to dialect, mannerism to mannerism – it’s an impressive turn which quite often adds a great deal of warmth to the proceedings.  As dark as the tale gets, humor is present, as well, as Meredith brings the small town residents to life, each having there own peculiar connection to the mysterious Woman in Black.  Sharing the stage as The Actor, Spencer Cantrell has a very different task.  He becomes the anchor for the audience.  He is the one hearing this tale, just as we sitting in the theater are, and his investment in the story is what pulls us in.  In this case, Cantrell is immensely relatable as a man of logic wrestling with the illogical.

“The Woman in Black” is a fairly well-known story now, having been a popular novel, two film versions and it has been running on the London stage nonstop for 20 years.  That is evidence enough that it is a solid piece of writing both as a book and in this adaptation for the stage.

But, if it’s a ghost story… what about the ghost? 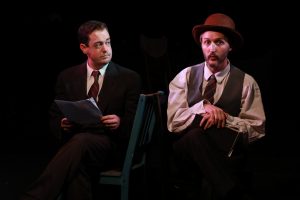 There are numerous ways this story can unfold for an audience. Interestingly enough this production, under the direction of Jacob Smith, has made the choice to present the Woman in Black as seen through the eyes of The Actor.  There are no scrims here, no overly flashy theatrics.  As The Actor wrestles with the idea that he has witnessed something which logic tells him cannot be real, but his eyesight interprets as being real, we the audience see the Woman in Black (played with effective intensity by Amanda Rae Troisi) in the same manner – she is real.  The Actor must convince himself she is real because any other option is too frightening for him to consider.  It’s a fascinating theatrical choice for it gives the Woman a sense of foreboding and a sense of purpose that might be missing if she were presented as a possible trick of The Actor’s mind.  Also, playing this straight adds weight to several moments where the Woman in Black expresses her frustration and rage.  It also adds an eerie sense of mystery when she simply hovers, letting her presence be known.  For the Actor, he manages to justify the Woman’s presence as part of the story he is being told, even as the encounters become very intimate as he comes face-to-face, literally, with this spectre in his midst.

Is this horror?  Yes.   The way this production has chosen to tackle the material is through stark reality, though.  The lighting is creepy when necessary, but surprisingly bright during scenes of frank discussion between two men learning about each other.  There is a ghost, there is creepiness, but the point here is faith in evil is real and it can surprise us by appearing at any time.  An entire town denies encounters with this character.  Is it their faith that gives the Woman in Black her power? Perhaps.  But it does not make the evil less real.  This is subtle, slow-burn ghost territory that wants you to lean forward and pay attention… for the true horror comes from the revelation of simple details.  A glance foretells death.  A scream in the fog can lead you to your doom. 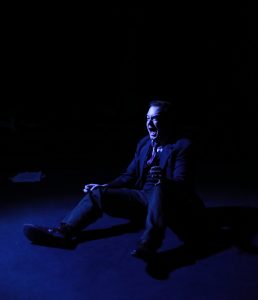 For those of you familiar with this story only through the 2012 film starring Daniel Radcliffe I recommend a visit to the original material. There were changes made for that film which weakened the dramatic impact of the story.   Especially concerning the fate of the main characters.  Particularly, the stage version offers information revealed in the final act which provides two moments of emotional devastation that will haunt you long after the play ends.

In this Theatre Unleashed production, the sense of dread builds until the final moments of the show.  The clever use of sound is also key to creating the atmosphere of this ghostly tale.

If you’re looking for dramatic creepy fun this Halloween season, “The Woman in Black“ offers a refreshing change of pace to the “haunts” you will be visiting this October.  Pay her a visit, if you are brave enough.

Keep in mind, however, she has a tendency to follow people home.

This Theatre Unleashed production is currently set to run through November fourth.  For tickets click here.